By Chris Williams: Tim Bradley says that Manny Pacquiao is a “dangerous” fight for Terence Crawford because he’s got the talent to take advantage of all his flaws.

The former two-division world champion Bradley reveals that he’s sparred over 100 rounds with WBO welterweight champion Crawford (37-0, 28 KOs). He saw holes in his game that a fighter like Pacquiao (62-7-2, 39 KOs) would take full advantage of.

There are reports that the former eight-division world champion Pacquiao and Crawford could be fighting on June 5th in the Middle East. Nothing has been confirmed yet, but that’s a fight that has the possibility of taking place.

It’ll come down to whether Crawford’s Top Rank promoter Bob Arum can come up with the financial package to get Pacquiao, 42, to agree to take the fight.

Pacquiao reportedly asks for $40 million for the Crawford fight, but it wouldn’t be surprising if his asking price is higher than that.

Pacquiao is dangerous for Crawford

“That’s a mean name, Dre. I got to say,” said Tim Bradley to ESPN in talking about Manny Pacquiao as an opponent for Crawford. 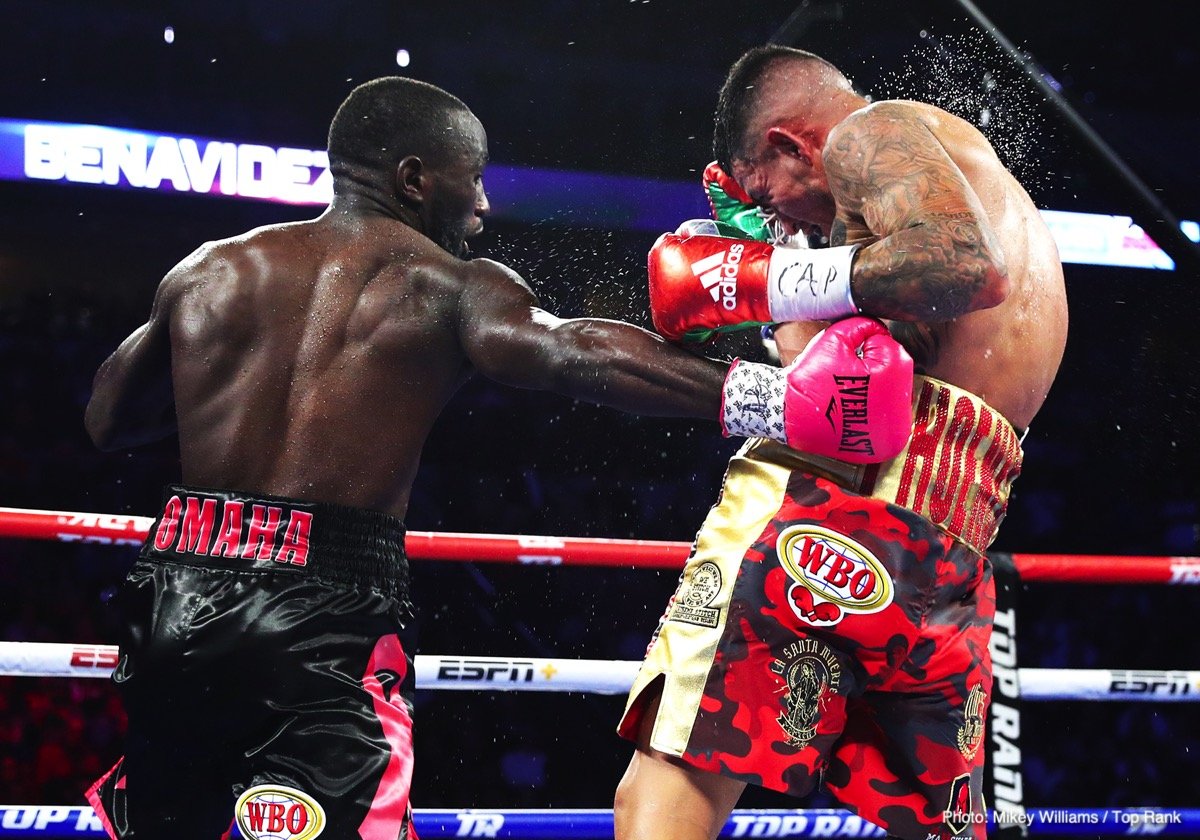 “It was early in Terence’s career. I understand he’s gotten a lot better to where he was when I was sparring, but his tendencies are still the same.

“You also know that Terence ‘Bud’ Crawford gets hit early, and he gets hit often early. Manny Pacquiao is a quick starter as well, and he still has that blazing backhand that he has that showed a massive amount of punching power.

“So this is a dangerous fight. This isn’t one of those fights where you can say, ‘Well, Bud Crawford should win this fight hands down.’

Chris Williams totally agrees with Bradley about Pacquiao being “dangerous” for Crawford, who has a bad habit of pulling straight back when he throws a punch.

One of the main reasons Crawford is boring to watch is his tendency to retreat backward after throwing a punch. Instead of staying in the pocket to continue trading, Crawford pulls back to avoid anything that might be thrown at him.

Even when nothing is coming his way, Crawford still pulls out and darts backward, and it’s so boring to watch.

“I agree with you; it’s still Manny Pacquiao in the ring,” said Joe Tessitore.

“Now it’s a 42-year-old Manny Pacquiao against a prime 33-year-old, 37-0 with 28 knockouts, number one pound-for-pound [on ESPN’s P-4-pound rankings], who I think would be a substantial favorite.

“But I agree with you. When Manny Pacquiao is in the ring, anything can happen, and it’s one of the biggest events the sport can produce.

“The last time we saw the living legend Manny Pacquiao in the boxing ring was July of 2019 when he defeated then WBA welterweight champion Keith Thurman.

“The next time we could see him [Pacquiao] is June 5th in the Middle East. Multiple reports of Pacquiao returning to take on the guy who is number one on ESPN’s pound-for-pound list, Terence ‘Bud’ Crawford,” said Tessitore.

Just so you know, Crawford is ranked #3 in the Ring Magazine pound-for-pound rankings, and that’s the ranking that many boxing fans use to judge whether a fighter is at the top.

Pound-for-pounding rankings don’t mean anything, though. What’s more important than these fantasy rankings is the opposition that the fighters have fought, and unfortunately for Crawford, he hasn’t fought the same type of opposition as fighters ranked below him in ESPN’s pound-for-pound list.

Nowadays, it’s easy for clever promoters to guide their fighters to an unbeaten record and a high ranking on the pound-for-pound lists by matching them against guys they know they can beat.

When you look at Crawford’s thin resume, which barren of talent, you have to suspect that Top Rank has built him up with their careful match-making.

Crawford should have already fought these guys:

The fact that the best name on Crawford’s resume is Viktor Postol clarifies that he shouldn’t be ranked #1 on any pound-for-pound list.

Until Crawford starts beating the solid fighters like Vergil Ortiz, Spence, Ennis, and Porter, you can’t put him in the top 10 in the pound-for-pound list because he’s fought too many fluff fighters.

“I’m hearing the fight is going to take place, and this is the name [Pacquiao] that the critics have been calling for from Terence Crawford,” said Andre Ward.

“Apparently, from what I’m reading, Terence Crawford hasn’t fought anybody.

“I guess Ricky Burns in his home country of Scotland isn’t anybody. Coming right back and fighting Yuriorkis Gamboa when Gamboa at that time was being considered the next Floyd Mayweather.

“Going to 140 pounds and cleaning out the division, literally winning every belt and beating a guy, Viktor Postol, who is still fighting strong at that time.

“Then coming to the welterweight division, calling for the big names and unable to get those big names, but then beating Jeff Horn, a fighter that gave Pacquiao all he wanted in Australia, a year after Pacquiao fought this young man.

“So, Manny Pacquiao is the name the critics are calling for, and hopefully, Terence Crawford can get that name,” said Ward.

Yeah, Crawford cleaned out the 140-lb division, but he didn’t beat anyone good to win his four world titles. The opposition that Craword beat to capture his world titles at light-welterweight was nothing to shout about.

The fighters Crawford beat to unify the 140-lb division:

None of those guys have been relevant since Crawford fought them, and none of them have done anything since. If they were good fighters, they should have been able to win world titles after Crawford abandoned the 140-lb division, but they didn’t.

Chris Williams hates to break this to Andre Ward, but Crawford HASN’T fought anyone.

Ricky Burns and Yuriorkis Gamboa were both on the downside of their careers when they fought the much bigger Crawford years ago.

Gamboa was great when he fought at 126, but by the time he fought Crawford, he’d moved up to 135 and had looked terrible in his two fights in that weight class against Darleys Perez and Michael Farenas.

This was NOT the same Gamboa that had twice captured world titles at 126 years earlier.

By the time Gamboa fought Crawford, he had turned into a once-a-year fighter for the last two years, and it was clear that he wasn’t the same guy he’d once been.

“Well, it was first reported by The Athletic, and I thought, ‘Wow, this is a great fight,’ but I think it’s a real long shot,” said Mark Kriegel.

“The first time it was broached was when Pacquiao was still under contract with Top Rank with Crawford.

“Here we are years later. I don’t think things are going to get any easier. We’re finding out the easiest thing in boxing is to talk about getting a fight with Manny Pacquiao, ask Ryan Garcia.

“The most difficult thing to do in boxing is to get a fight with Manny Pacquiao,” said Kriegel.

It is easy to talk about putting together a fight with the former eight-division world champion Pacquiao. Still, it is rare, especially when you don’t possess the popularity required to fight him.

Crawford has a nice glittering resume, but there are no substantial names, and he’s not a pay-per-view draw, even at the ripe age of 33.

For whatever reason, Crawford has never attracted boxing fans to purchase his fights on PPV, and it’s easy to see why.

Putting Crawford in with Viktor Postol and Amir Khan on PPV was destined for failure, and those guys are indicative of the type of fighters he’d been padding his record with during his 13-year professional career.

‘Canelo is going to destroy Plant’

Video | Ronaldo Souza in good spirits after breaking arm at UFC 262: “I think everything’s going to be fine”

Video | Ronaldo Souza in good spirits after breaking arm at UFC 262: “I think everything’s going to be fine”